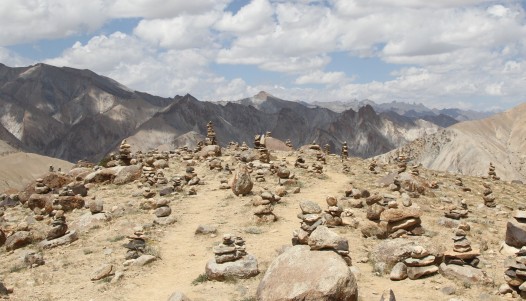 Landing in Leh, Ladakh, at 11,500 ft., brought back memories of my previous trips to Lhasa, Tibet, when I had felt the effects of altitude – that just meant I would have to drink lots of water, abstain from beer, and rest in my hotel room for an entire day before moving around too much. Just a few weeks prior to my trip to India, I had attempted Mt. Rainier but bad weather had prevented us from leaving Camp Muir at 10,400 ft. So, I hadn’t been as high as Lhasa in over 6 months.

As soon as I got off the plane, I noticed the substantial military presence in Ladakh. In 1999, India and Pakistan fought a two-month war in the area. Historically, there have been many wars fought in Ladakh as rulers from Baltistan and Tibet, and later the British, laid claim to the land. How Ladakh became part of India was an “accident of history”. The upside of the militarization of Ladakh was that even remote places in the region had access to good roads and other basic amenities.

In Leh, I stayed at the home of a local family. Karma, the father, worked for the government. His wife, Rigzin, was a nurse. They had two sons and a daughter – all of them went to school, and we developed a real fondness for each other.

The first few days were spent exploring the local sites on a motorcycle: Thiksay Monastery, Hemis Monastery, Shey etc. The landscape, the monasteries, the peoples and the culture reminded me of Tibet. But while Tibetans are slowly losing their identity, the Ladakhi’s have managed to freely maintain their distinct culture while integrating into India.

After a few days in Leh, I hopped on a motorcycle heading north towards Nubra valley over the Khardungla (supposedly the world’s highest motorable road at 18,380 ft.) from where peaks of the Karakoram range were visible. The Nubra valley is famous for its two humped Bactarian camels which were used during the silk trade. Another notable site was the Diskit monastery.

My next adventure was a five-day trek to the Markha valley. The first three days of hiking were mellow (between 5 to 7 hours) on mostly level terrain but the temperature was very hot. With very little vegetation (Ladakh is a high desert) and the sun hitting you directly it is extremely important to keep hydrated and wear a proper sun hat at all times. Temperatures in excess of 100 degrees Fahrenheit have been recorded in Leh and the surrounds I was told. Here, the landscape reminded me a lot of Upper Mustang:  the barren high desert, the eroding rocks, the mani walls, the chortens, the distinct Tibetan style square houses with flat roofs, and the patches of irrigated green oases near. Then on Day 4 of the trek, we started ascending steeply via Tharchungste to our camp at Nyimaling (15,600 ft.) which was a jump of over 2,500 ft. from the previous day.  Here many people at camp could be seen feeling the effects of altitude. This day’s hike reminded me a lot of Upper Dolpo: the gray and reddish mountains, the few snow capped peaks, and the slight vegetation. The next day was a short slog to the Kongmarula pass at 17,285 ft. Once over the pass we made a quick descent to the road head and then as is customary we had our share of beers (the notorious Godfather beer at between 5% to 8% alcohol content).

After more than two weeks, it was time to leave Ladakh. But I do know in my heart I’ll be back.